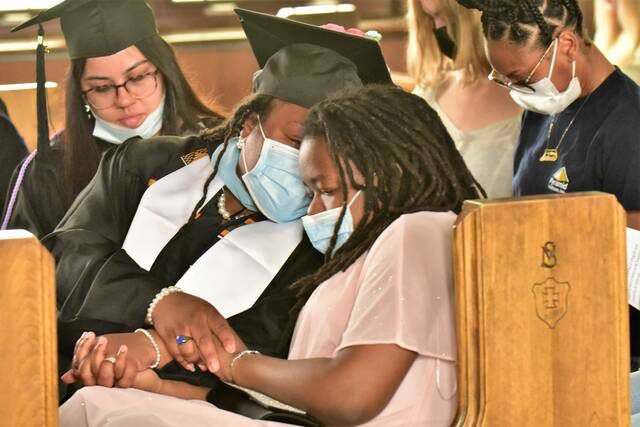 In Misericordia’s Women With Children program, children are the real motivation

DALLAS TWP. – Confronted with the loss of child custody that kept the job that prevented eviction, Stacy McCarter heard about a program allowing women with children to earn a college degree living rent-free in a place she had never heard of, 900 miles from her St. Louis home.

The insurmountable problem: No more than two children per single mother. She had three.

With terrible twins and shifts as a caregiver that made normal family life impossible, Rinae Cotton from Kingston heard about the same program and applied with no hope of being accepted. Yet the motivation demanded the attempt.

Cristal Nazario had previously been accepted into the same program and found it too difficult, earning a 0.84 grade point average in the first semester. Fleeing at night without telling anyone, she ended up on welfare in Florida, living in a hotel and working 12-hour shifts, raising a two-year-old son and a daughter in kindergarten. Getting back to the program seemed impossible – until she got a call one Friday.

Come back, they suggested, but be in Pennsylvania on Monday.

The three women overcame these and other hurdles to graduate early in the spring from Misericorida University, but stood out from the rest of the graduates because they were part of the Women with Children option of the school. One of eight similar programs nationwide, it provides struggling single mothers with the security, financial assistance, housing and other support they need to turn their lives around.

“I remember arriving with my children in a double stroller thinking I must be crazy. If it hadn’t been for my children, I don’t think I would have made it,” Rinae said during a special ceremony at Misericordia’s Mercy Chapel a day before the start. “It’s those footsteps behind you. The real reason you’re here is for your children.

“My brother died,” Stacy recounted, one of many heartaches endured on her way to a degree. “He was my heart and my soul. I felt I had to come home. But my Misericordia family held me and helped me through this ordeal. She stopped several times during her speech at the chapel, clearly holding back tears. “I’m so grateful to every single person who breathed a breath of air with me.”

The Ruth Matthews Bourger Women With Children program includes free books and school supplies for mother and children, support in obtaining government grant programs and, perhaps most importantly, free housing in group homes on the campus.

Journeys to this accommodation vary widely. Of the three graduates this year, Stacy is the farthest. And she unapologetically credits divine intervention in the journey of the nation’s famous “Gateway to the West” arch to the Back Mountain campus which features its own much smaller arch entrance. A school founded and still run by the Catholic Sisters of Mercy.

“I really have to say my faith is the reason I ended up here,” Stacy says. His pastor in St. Louis “came across a pamphlet at a Mercy Center in Missouri,” learned about the program, and passed on the information.

“I’ve never even heard of Dallas, Pa. I said no, it’s too far, I don’t know if I could live without the others here, I’d have to give it all up. But there were three signs.

Stacy owed $8,000 “with risky daycare” and unexpectedly received a check in the mail for her debt. Sign one.

She attended a parade and asked a person at a booth what time he came down. “’Well, I don’t know, I’m not from here,’ the person said. “I’m from Dallas, Pennsylvania.” She asked me to consider this program. After the show, I looked for her again, but she wasn’t there, and no one even knew the booth was there. Sign two.

Stacy went home to fill out the application and saw that mothers could bring no more than two children. She called her pastor to complain about the false hope. She considered giving her youngest to someone else. “I thought it was a once-in-a-lifetime opportunity, and if I didn’t take it, I wouldn’t make it.”

She called Misericordia and the program director, Katherine Pohlidal, told her, “We just started accepting moms with three children. I dropped the phone. Sign three.

“God opened the way for me.”

Stacy made the dean’s list, earning a Bachelor of Science in Elementary and Special Education. Along with an array of volunteer work on her resume here and at home, she has always aspired to work in a classroom. “Teaching is my passion.”

Cristal attended a part-time community college in the Harrisburg area before discovering the Misericordia program. “I couldn’t believe the accommodation was free.” She arrived on campus determined to get a nursing degree, but that abysmal first-semester GPA melted her willpower. Yet, away from Misericordia, she realized that leaving “was the worst thing I could have done”.

Getting a second chance was quite difficult. Getting his GPA seemed like a hill to climb. “I was on academic probation for an entire year,” she recalls. However, this was not the only obstacle.

“The hardest part was wanting to spend more time with my children. But I had to study. Guilt hurts. I took away our sense of normalcy, and in the new normal mom was stressed. It was hard.

All the work paid off. “I got my GPA up to 3.17.” She rose from dropout to Dean’s List, earning a Bachelor of Science in Business Administration with a focus in healthcare management.

“When I came back, I felt it was now or never. They don’t give anyone who leaves a second chance.

Rinae took the most direct route to Misericordia, at least in distance. Struggling to raise twins in Kingston as a widow, she heard about Women With Children from her mother, who was working at a CareerLink center in the state when Pohlidal visited to talk about the program.

“I worked as a nurse’s aide. The pay wasn’t bad, but the shifts were terrible. Second shift meant I picked up my boys at 11:30 p.m. at night,” Rinae said. “I needed something more normal.”

Although she was convinced she wouldn’t come in — or maybe because of it — she began making recurring calls to Pohlidal and program coordinator Sandy Johnson. “I bugged Kathy and Sandy until they didn’t want to hear my voice anymore. They said I was there and I put in my resignation the same day.

Stubborn persistence – and embarrassment – ​​became his norm. She recounts almost endless texts and conversations with Pohlidal and Johnson about all the uncertainties she faced, and credits her success to their reassurance and guidance. She also gives, well, extra credit. “I did all the extra credits I could get,” she said. “Trust me, it works.”

Indeed, not only did Rinae earn her Bachelor of Arts in Communication and Design, but she had a job offer before landing the Sheepskin, a marketing position with a hybrid schedule well-suited to a single mom: “Three days at the office, and two at home.

As valuable as the program was to them, it wasn’t, as Rinae put it, “moms singing lullabies and being best friends.” Although each family has their own bedroom, they share the common areas of each house with the other families.

Having other women in a similar situation helps, of course. “Having relationships within the program and the house is great,” Rinae said, “But you also have to build relationships outside. If you argue (with someone in the program), you feel like your whole world is falling apart. Sometimes there are things you just have to accept and move on.

The community house setting can also be a mixed blessing for children. They made friends, and with graduation, friendships can end.

“Children benefit from seeing other children in the same setting,” Rinae said, adding that her children have learned a real lesson in resilience and adaptability that will stay with them throughout their lives. “But it’s hard for them to move on.”

“My kids said ‘I don’t want to leave my friends’,” says Cristal.

But of course, it was all about a better life for these children.

“It’s safety,” Stacy said. “My safety and that of my children. Because I was safe, I could be the student, not the mother in crisis.

“That’s what people need,” added Cristal, “reminders that everything will be okay.”

Despite all the difficulties, all the hard work and all the uncertainty they endured, Stacy summed up the program in five words.

“There are immeasurable blessings.”