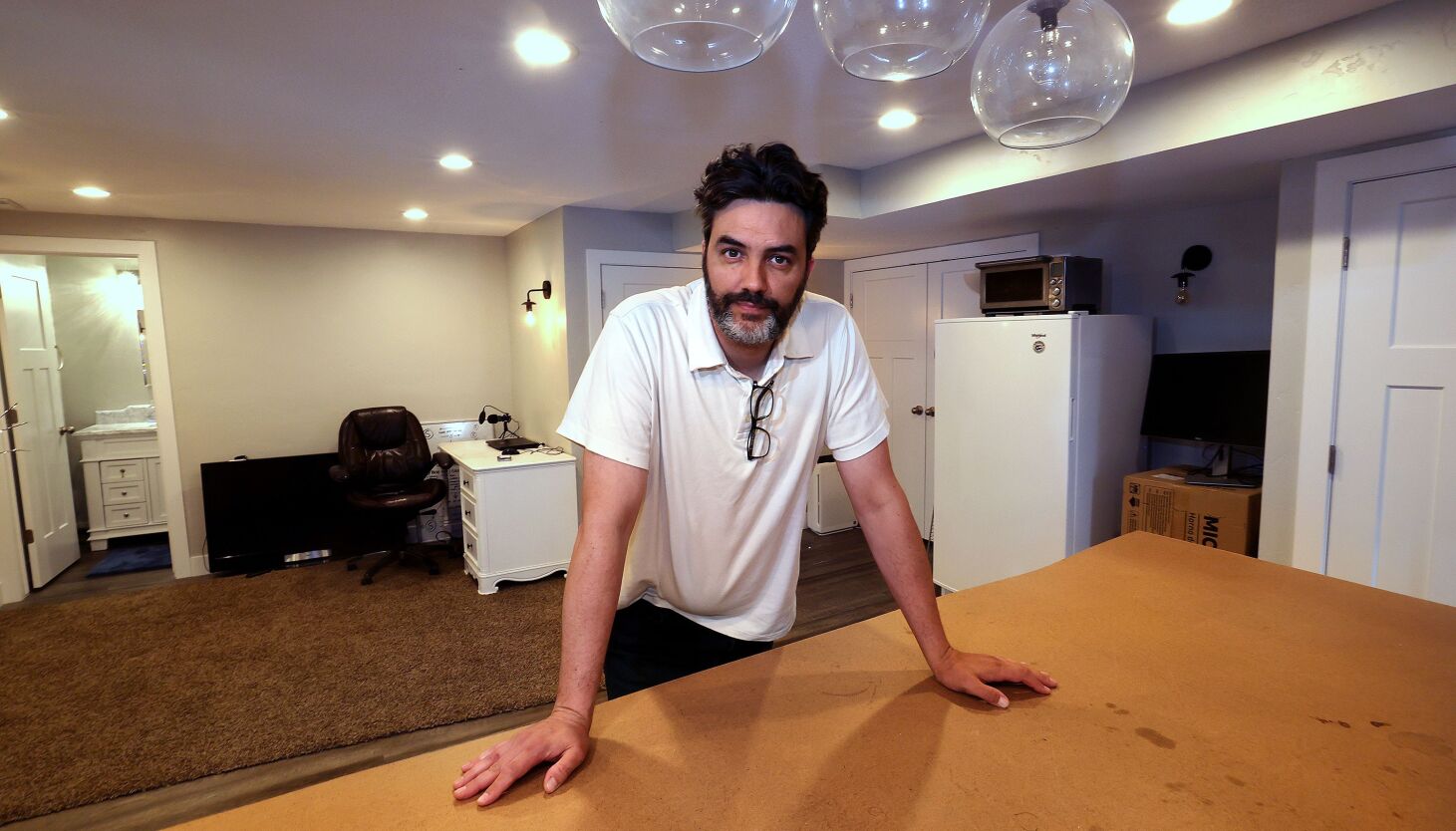 Michael Atkinson and his wife have no ties to Ukraine, Russia or Eastern Europe. They never even visited the area.

But they have a finished basement apartment in their home in Herriman that a Ukrainian mother and her three children will call home in the coming weeks.

The Atkinsons are among 19,000 other people living in the United States who have applied to sponsor a Ukrainian family through the Biden administration’s Uniting for Ukraine program, which entered its third week on Monday. The Department of Homeland Security announced that more than 6,000 people had been approved and made travel arrangements, and the first wave of people admitted under the program were beginning to arrive.

Biden says the United States is ready to admit at least 100,000 Ukrainians fleeing the Russian invasion.

But the administration is taking a new approach to resettlement with Ukrainians, relying on the goodwill of people already legally in the United States. The sponsors – not the government – will be responsible for coordinating the resettlement and financially supporting the Ukrainian refugees.

It is the largest sponsor-based resettlement program in US history, designed to streamline the process for Ukrainians with their friends and family in the United States. But there’s nothing stopping strangers from sponsoring strangers, the approach taken by people like the Atkinsons.

The family slowly stepped out of their comfort zone, welcoming French family friends one year, then foreign students the next year.

How the program works

Anyone legally residing in the United States can apply to be a financial sponsor for Ukrainian refugees, including other immigrants and green card holders. The app is on the Department of Homeland Security Portal.

It’s what some experts, like Aden Batar, director of migration and refugee services at the Salt Lake office of Catholic Community Services, call a compromise.

Ukrainians who need an immediate route to the United States now have one. But humanitarian parolees are not eligible for social programs like food stamps or Medicaid — refugees going through traditional resettlement pathways are. Nor will they receive the same level of support from resettlement agencies like the International Rescue Committee or Catholic Community Services.

“It’s going to be tough for someone who has lost everything and witnessed all these horrible traumas of war and now they’re coming and they won’t be eligible (for social programs),” Batar said. “They’re going to need the support of resettlement agencies, which is why we’re asking the federal government and Congress to take ownership of the resources.”

For now, the program is financially dependent on sponsors, who in their Form I-134 must prove that they can provide housing or cash assistance if needed. Batar says Congress could allocate funds so that parolees are eligible for the same benefits that those with refugee status receive.

Uniting for Ukraine received 14,500 applicants in the first 10 days, according to The the wall street journalstraddling many of the 20,000 Ukrainians who attempted to enter the United States along the Mexican border.

“I don’t think it would be possible without social media”

On Tuesday, Melanie Williamson of Salt Lake City spent the afternoon applying to sponsor a family currently living in a refugee camp in Mexico City, who flew to seek asylum or humanitarian parole, but turn down now on Uniting for Ukraine.

The social media platform is a hub for sponsors connecting with refugees, with Facebook pages like North America for Ukraine hot air balloon to 1000’s of members from Ukraine, USA and Canada looking to match.

“I don’t think it would be possible without social media,” Williamson said.

Like the Atkinsons, Williamson had no prior ties to Ukraine. But when war broke out in February, she felt compelled to donate money to aid groups. Then she joined several Facebook groups and eventually found herself reaching out to strangers thousands of miles away, asking if they needed a sponsor.

“If I had space in my house, I would let people in,” she said, noting that the family won’t be living with her — they’re looking at Austin, Texas instead.

“But there is still something really rewarding about helping someone, individually. I’m just one person but I impacted one person,” she said.

Ukrainians cannot apply for humanitarian parole through the program and must instead find a sponsor to apply on their behalf. Often refugees will submit what Williamson and other sponsors have likened to an online dating profile, detailing their trip outside Ukraine and their hobbies, interests and even religious and political views.

“It’s kind of like dating,” Michael Atkinson said. “You can tell a lot about people who apply based on their posts.”

Potential sponsors also create what looks like a rental listing.

“People were posting here saying, ‘I have a house in upstate New York in the country and I’m looking to house a family. And they’ll get all these responses from Ukrainians saying, ‘Choose me, choose me,’ Atkinson said.

Scrolling through several Facebook pages, they would see messages from Ukrainian families asking for a sponsor. It wasn’t an easy process – often people didn’t respond or they realized that the family didn’t need physical accommodation. But eventually, they opened a dialogue with a young mother currently living in Turkey with her three children. In a few weeks, they will land in Salt Lake City.

Non-governmental organizations and non-profit organizations help match people in the United States with Ukrainians, such as Welcome US who will advise sponsors when there are refugees in need. Potential sponsors have also turned to the NextDoor community app to coordinate.

Immigration experts say Uniting for Ukraine could be a model for future resettlement efforts.

“There’s always been this conversation about community sponsorship related to refugees – why don’t we have that? How would that work? And towards the end of the Obama years, there was this pattern,” said Asha Parekh, director of the Utah Office of Refugee Services.

Parekh has mixed feelings about the program. Resettlement is a long process, and getting permission to come to the United States is the first step in a multi-year journey that includes finding long-term housing, a career, health care, English learning, childcare, education and more.

Some of the guidance resettlement agencies typically provide will not be available to Ukrainians on humanitarian parole status. But she says it’s inspiring to see the outpouring of support in a system that has so far proven successful.

“This is the first time that (US Citizenship and Immigration Services) has an online application. And they’ve already approved 6,000 applications, that’s remarkable. On the one hand, yes, there are gaps in what “They do. On the other hand, they do things that they’ve never done before,” she said.

What to expect as more Ukrainians flee war

With the program relying entirely on sponsors, experts say the United States is unlikely to resettle 100,000 refugees through Uniting for Ukraine alone.

“I think it’s going to be really impossible for that number to be filled with sponsorships,” said Batar, of Catholic Community Services.

Batar thinks more people are likely to enter the United States through asylum or the traditional refugee route, which can take years.

“I think there are still people who are going to benefit from this, those who have family or friends (in the United States),” he said. “…But more people are still stranded, whether in Ukraine or neighboring countries, and don’t have relatives or people to find them sponsorship.”

In February, March and April, fewer than 550 Ukrainians were admitted to 25 US states through the country’s refugee resettlement process. Washington state admitted 164, the most in the United States – none were resettled in Utah, according to data from refugee processing center.

The Department of Homeland Security still does not know how many Ukrainians will be resettled under the refugee program. Utah likely won’t see anyone until October, Parekh said.

At least 87% of Beehive State voters support the resettlement of Ukrainian refugees, according to a Deseret News/Hinckley Institute of Politics poll.

Even with the traditional resettlement process, experts say most refugees will choose to stay in neighboring countries – such as Poland, Romania or Hungary, which have collectively admitted more than 4.5 million Ukrainians – rather than to move to the United States.

“Most people prefer to stay close to home. Because ultimately their end goal is to return home when the situation allows,” said Olga Sarrado, spokesperson for the UN Refugee Agency.