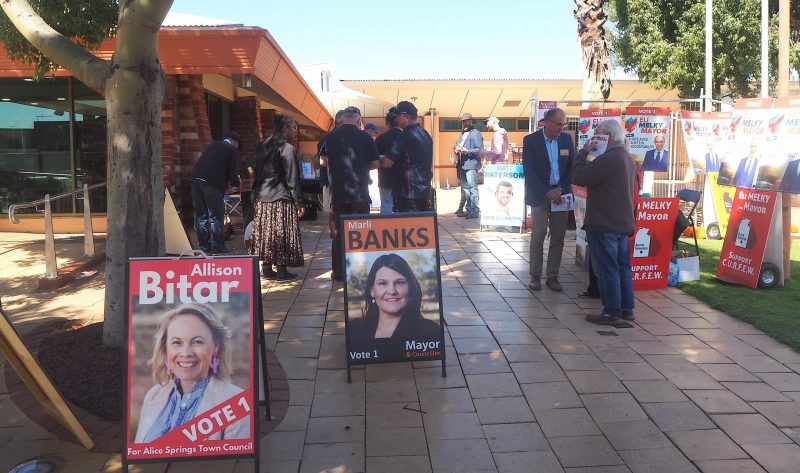 Some candidates and many voters have expressed fervent hope that Saturday’s election will put an end to the formation of voting blocs in City Council: no more five-four decisions with the usual suspects making up the respective camps.

If the voting material currently being distributed on council lawns outside the advance polling location is any indication of where allegiances lie, it may still be within the realm of possibility.

While there are fairly distinct conservative / progressive blocs defined by preference in the mayoral race, this is much less the case for the general council.

Of the 10 mayoral candidates, Matt Paterson and Jimmy Cocking are the only ones to appear in second choice on several cards. Mr. Paterson is supported by Aaron Blacker and Steve Brown who he ranked second and third respectively on his own list.

While this trio have pretty similar looking preferences with Jimmy Cocking, Blair McFarland, and Angus McIvor at the bottom of the ladder, they have different opinions on Eli Melky. Unsurprisingly, Mr. Brown put it last, as he openly declared his dislike of Mr. Melky during his campaign.

The other two are much more favorable, and Mr. Blacker has Mr. Melky in third, ahead of Mr. Brown.

Mr Cocking tops the list for Patrick Bedford and Mr McFarland, whom he himself placed second and third.

Mr. Melky, Mr. Bedford and Marli Banks seem to occupy the middle of the road on most maps.

Ms Banks says she “isn’t playing the preferences game” and has created a dummy voting card with the preferences listed in the order they appear on the ballot. She says the preferential deals are the starting point for the factionalism that plagued the last council.

While her intention is to encourage voters to make up their own minds, it is not clear on how to vote, and protesting in this way could cause her to fall out of favor with some voters.

Angus McIvor, who has been somewhat absent in his campaign, says he does not issue voting cards, nor signs that fill the shoulders along major arteries.

He says all that paper and plastic is “hypocritical” to any candidate campaigning for recycling or environmental issues.

Wayne Wright does not have a voting card and could not be contacted.

On how to vote cards for the municipal election, the field is much less grouped in their preferences than mayoral candidates.

Mark Coffey appears to be popular with many other contenders, as does Michael Liddle.

Emily Webster and Kim Hopper are keen to see more diversity in the chamber and have both put all other female candidates at the top of their lists.

Steve Brown stands out because he’s at the bottom of four lists and near the bottom of two others. James Dash and Wayne Wright are doing only slightly better. They don’t make the top eight on anyone’s list.

But otherwise, there is a real mix with no obvious groupings, and certainly not in the numbers that would lead to a dominant group of five.

To be elected mayor, a candidate needs a majority of formal votes (50% plus 1 vote).

If this does not happen at the first recount, the candidate with the fewest votes is eliminated and their votes are redistributed to their next choice, and so on.

DWP benefit calculators that calculate how much Universal Credit, JSA, or PIP you could get each month