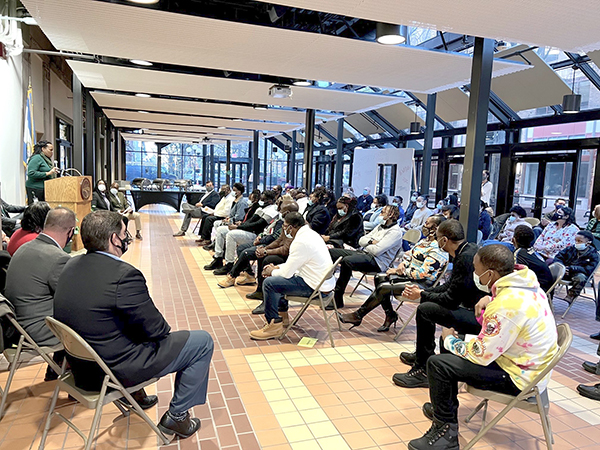 SYRACUSE – Those who participate in the second class of Syracuse Build’s Pathways to Apprenticeship program have graduated and have moved on to pursue apprenticeships and careers in various fields of construction.

Those interested in participating in the next class of the apprenticeship program can apply later this month.

A total of 16 Syracuse residents participated in the 11-week paid program that prepared them for work in construction fields, according to a press release from the CEO of CenterState. The group members graduated in a ceremony Dec. 17 at City Hall Commons and join 15 other graduates from the program’s first round in August.

Syracuse Mayor Ben Walsh, Onondaga County Director Ryan McMahon, CEO of CenterState and other community partners spoke at the ceremony to salute the efforts of attendees.

The Apprenticeship Preparation Program emphasizes preparing women, people of color and veterans to help them secure places in approved apprenticeship programs for the construction trades. Eleven of the graduates of the first cohort are actively learning with unions, with more expected to join in March 2022 when other unions accept new classes, per CenterState CEO.

“Congratulations to the graduates of the second cohort of the Pathways to Apprenticeship program and for their commitment and success during this period of in-depth training,” said Chris Montgomery, director of Syracuse Build. “The hard work of graduates and their eagerness to join a local union is a testament to Syracuse Build’s strong and inclusive workforce. I am grateful to Ebony Farrow, Manager of the Pathways to Apprenticeship program, and all of our partners who have committed and focused on the success of this program. I am delighted to see the advancements and opportunities that await these graduates as they embark on the next stage of their careers in the construction industry.

Getting into a union-sponsored registered apprenticeship can be “very competitive,” said the CEO of CenterState. The program included exclusive networking opportunities for participants with local unions, as well as coaching and preparation for the apprenticeship application process.

“These graduates will join those in the first batch of the program and take the next steps in their careers locally, which will impact not only their lives, but also their families and communities,” said Ebony Farrow, program manager. Pathways to Apprenticeship at CenterState CEO, said. “I am incredibly proud of each of them for their hard work and dedication throughout this program. They are proof that high quality talent exists in this community and point out that we can connect often marginalized groups with opportunities if we intentionally provide the right training and resources.

Syracuse Build is a community initiative started by the Mayor of Syracuse Walsh to support local construction activity by connecting job seekers from Syracuse’s “historically marginalized” communities with career paths in construction-related fields. .

The goal of Syracuse Build is to align local government, labor unions, anchor institutions and construction companies into a “coordinated network” of community, training and workforce partners. Work Train at CenterState CEO serves as an intermediary, providing resources and partners to develop both the Syracuse Build initiative and the Pathways to Apprenticeship program, according to the release.

Walsh said he was “excited” to see another class complete the program, “taking the next step” towards careers in building and construction.

“This cohort demonstrates the keen interest of our Syracuse City residents in these career paths,” said Walsh. “I thank all of our workforce development and organized labor community partners and congratulate all of the graduates. I am especially grateful to the Chair of the Common Council, Helen Hudson, whose vision and leadership helped make Pathways to Apprenticeship a reality.

Funding for the Pathways program comes from a number of community partners seeking to help prepare the local workforce. They include the city of Syracuse; HOPE of Greater Syracuse; Empire State Poverty Reduction Initiative; North American construction unions; Central New York Community Foundation; United Way of Central New York; and the Alliance for Economic Inclusion, said the CEO of CenterState.

Next class in January

The next class in the Pathways to Apprenticeship program will begin accepting applications in January.

Acceptance into the Pathways program is “competitive”. To meet the minimum requirements, applicants must be 18 years of age or older, live in the city of Syracuse, want a career in construction, be licensed to work in the United States, have a high school diploma or equivalent, to be able to read, write, and speak in English for training and safety purposes, and to be physically able to do construction work, said the CEO of CenterState.

Davenport DREAM Program in the Fourth Application Round