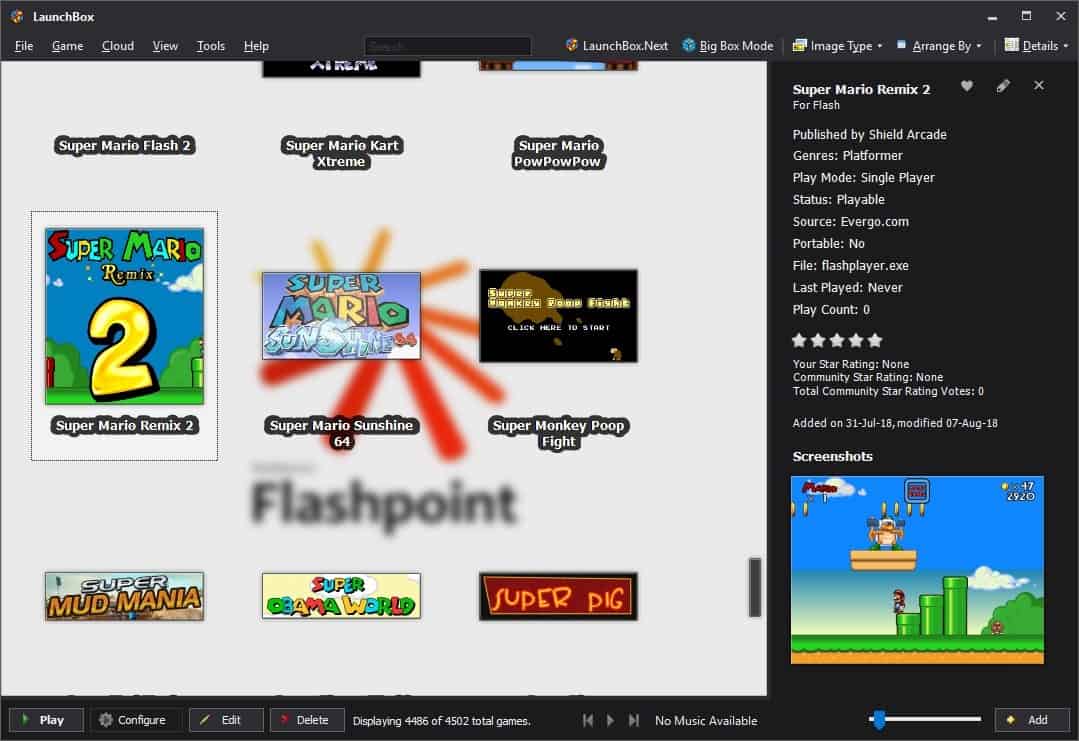 Adobe Flash will be phased out in 2020, and browser makers like Google, Mozilla, or Microsoft have started phasing out support for Flash in the browsers they make.

Think of Flash whatever you like, but the technology has been used to create a number of awesome games. The problem is, if no modern browser supports Flash, no one can play these games anymore unless they use browsers that still support it or find other ways to preserve the games and keep them there. player.

Although browsers still support Flash, Flash itself will no longer be updated and any security vulnerabilities found will remain unpatched.

Flash content may be deleted on many sites after Flash is permanently deleted; that would mean that many Flash games would be lost forever.

The Flash Games Preservation Project is an attempt to preserve Flash games so that they remain available and playable.

The project is huge; the current full distribution of Flashpoint is 31 gigabytes in size. You can download a smaller collection with a size of just 2.2 gigabytes if you prefer. The main difference between the two is that Infinity is configured to download Flash games that you select from Archive.org. The advantage is that you won’t have to download more than 30 GB of Flash files directly before you can start playing.

The main downside is that it takes longer on first boot to play the games as they need to be downloaded to the local system first. Also, some games will not work with Infinity and will not display for this reason.

The project maintains a Game Master List which is regularly updated. The current full version includes over 4000 games, including many classic games. The developer has over 2 terabytes of Flash dumps on Google Drive from sites like Gamepilot, JayIsGames, Newsgrounds, Kongregate, Armorgames or NotDoppler.

Some Flash games can be saved to the local system and run from there without any problem as long as a browser or standalone Adobe Flash projector is used for this. Others will not work because they are server-based or have built-in DRM, which prevents local play without modification.

The project uses the LaunchBox interface and the capabilities of the Apache web server to provide access to Flash games on Windows.

The launcher displays a list of available games, and users can click on any one to search for them, and on play to start the game locally.

Flashpoint requires Windows 7 or newer versions of Windows. It requires the .NET Framework 4.7 and a Visual C ++ redistributable. You can find copies in the arcade folder after you unzip the package on the local system.

Linux users can also run Flashpoint. Instructions can be found in the readme.txt file included with the distribution.

Flashpoint modifies the system proxy while it is running; this is necessary to run games that are locked, have DRM, or have dependencies that are not available locally.

You can run the custom redirector or the Fiddler redirector. The main difference between the two is that Fiddler is more reliable but also more interfering with network traffic while Flashpoint is running.

The developer suggests that no critical networking operations be performed while Flashpoint is running.

The way things are set up can be of concern. If you are concerned, consider running Flashpoint in a virtual machine on the system or on a spare PC if you have one.

The games are listed with screenshots and information; very useful. A quick test of the Infinity Edition was completely positive. I have played several games, and although it took a while for the downloads to complete, playing them worked fine and without any issues.

With hundreds of thousands of Flash games on the internet and 2 terabytes of data in the author’s Google Drive account, it’s clear that Flashpoint is a massive project that will take a long time before the majority of games are included.

The project gives gamers a great option to play classic Flash games even after the technology has been put to rest for good.

Now you: Do you play games online?

The Flash Preservation Project Flashpoint has created a solution for playing thousands of Flash games on Windows and Linux machines after Flash retirement.